Wings of Glory First Time Over the Lines 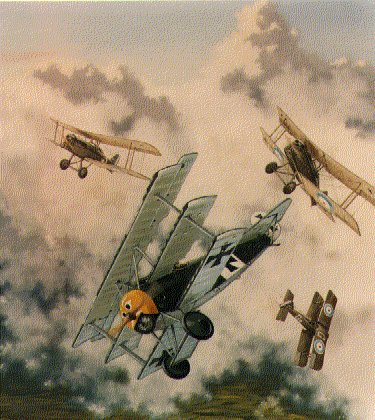 On March 6, 1918 America’s then leading ace, Major Raoul Lufbery, took Lt. Eddie Rickenbacker, America’s future leading ace, up for his firs flight over the front! Their flight of 3 French built Nieuport 28 fighter planes (they brought a friend, Lt. Douglas Campbell) took off from the American Aerodrome at Villeneuve at 8:15 in the morning. Historically, they didn’t get into a fight, but what if that flight of German Fighters had been game?

Take to the skies in a World War 1 fighter plane as Eddie Rickenbacker or a German pilot in Ares Games’ Wings of Glory Rules will be taught, Planes will be provided BUT NO PARACHUTES WILL BE ISSUED!